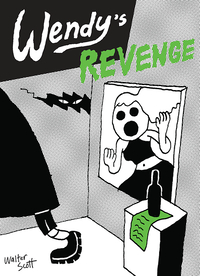 Wendy was at a crossroads, but the next chapter of her adventures sees her leave Montreal and head west to Vancouver, then to Toronto, and finally to Los Angeles. Filled with sardonic wit and ample realness, Wendy has her eyes set on the art world and she's out for revenge.

Walter Scottis an artist from Montreal, Quebec. His work has been exhibited across Canada andWendyhas been serialized on Random House Canada's literary digital magazineHazlitt. The eponymous first volume of Wendy was released in 2014 and was nominated for the Ignatz Award for Outstanding Graphic Novel.