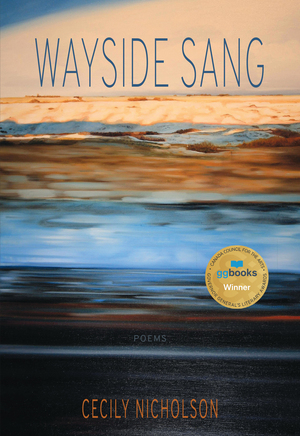 Wayside Sang concerns entwined migrations of Black-other diaspora coming to terms with fossil-fuel psyches in times of trauma and movement. This is a poetic account of economy travel on North American roadways, across Peace and Ambassador bridges and through the Fleetway tunnel, above and beneath Great Lake rivers between nation states. Nicholson reimagines the trajectories of her birth father and his labour as it criss-crossed these borders in a study that engages the automobile object, its industry, roadways and hospitality, through and beyond the Great Lakes region.

Engaging a range of discursive fields to form the metrics of this project, she is interested in the intersection of various artistic practices and how being in relation to them can lend dimension to page and text-based efforts. Consider Charles Campbell’s Transporter project, begun initially as a visual investigation of the phenomenon of forced migration, or Camille Turner’s various “sonic walks” which present narratives that explore the complexities of Black life in Canada amid a “landscape of forgetting” Black history, and Khari McClelland’s embrace of music as a “transportation device” uncovering the experiences of fugitive Blacks crossing into Canada and a breadth of practice concerning borders and movement.

This book was once in the fields and frequented bars. It rolls out of factories onto roads travelling north across the border and returning again to some understanding of home. There are passengers and possessions – travelling musicians – memories of the Caribbean – brothers determined by border crossings – daughters reassembled.