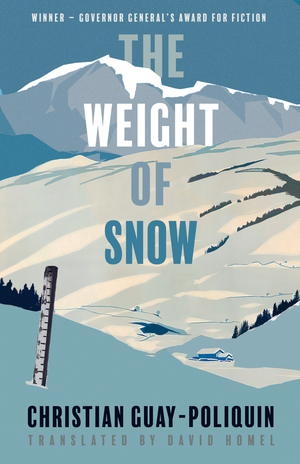 The Weight of Snow

A badly injured man. A nationwide power failure. A village buried in snow. A desperate struggle for survival. These are the ingredients of The Weight of Snow, Christian Guay-Poliquin’s riveting new novel. After surviving a major accident, the book’s protagonist is entrusted to Matthias, a taciturn old man who agrees to heal his wounds in exchange for supplies and a chance of escape. The two men become prisoners of the elements and of their own rough confrontation as the centimetres of snow accumulate relentlessly. Surrounded by a nature both hostile and sublime, their relationship oscillates between commiseration, mistrust, and mutual aid. Will they manage to hold out against external threats and intimate pitfalls?