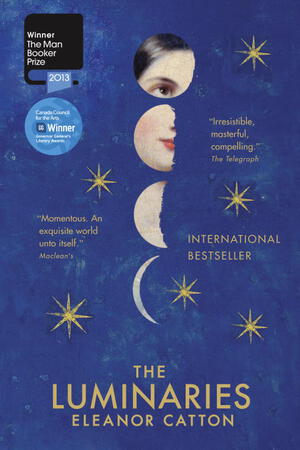 Winner of the 2013 Man Booker Prize and Governor General’s Award for Fiction, The Luminaries is a magnificent novel of love, lust, murder, and greed, in which three unsolved crimes link the fates and fortunes of twelve men.

It is 1866 and young Walter Moody has come to stake his claim in New Zealand's booming gold rush,  make his fortune, and forever leave behind a family scandal. On the stormy night of his arrival, he stumbles across a tense gathering of twelve local men who have met in secret to investigate what links three crimes that occurred on a single day: the town’s wealthiest man has vanished, a prositute has tried to end her life, and enormous cache of gold has been discovered in the home of a luckless drunk.  Moody is soon drawn into a network of fates and fortunes that is as complex and exquisitely ornate as the night sky.

Part mystery, part fantastical love story, The Luminaries weaves together the changing fates and fortunes of an entire community, one where everyone has something to hide. Rich with character and event, it is a gripping page-turner and a fiendishly clever ghost story in which readers will gladly lose themselves. It confirms Eleanor Catton’s reputation as one of the most exciting and innovative novelists writing today.