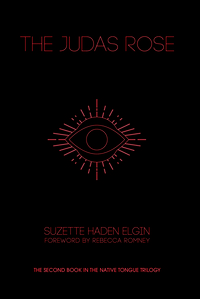 In the second volume of theNative Tongue trilogy, the time has come for Láadan—the secret language created to resist an oppressive patriarchy—to empower womankind worldwide. To expand the language’s reach, female linguists translate the Bible into Láadan and a group of Roman Catholic nuns are tasked to spread the language. But when outraged priests detect their sabotage, they send a double agent to infiltrate and destroy the movement from the inside.