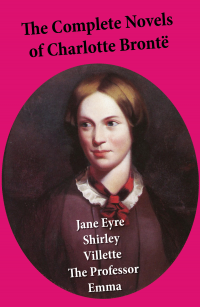 This carefully crafted ebook: “The Complete Novels of Charlotte Brontë” contains all 5 novels in onevolume and is formatted for your eReader with a functional and detailed table of contents.
Jane Eyre (1847)is a novel published under the pen name "Currer Bell." Jane Eyre was Charlotte Brontë’s second novel, but the first to be published. It follows the emotions and experiences of its character, including her growth to adulthood, and her love for Mr. Rochester. The focus is on the gradual unfolding of Jane's moral and spiritual sensibility and all the events are coloured by a heightened intensity. The novel contains elements of social criticism, with a strong sense of morality at its core.
Shirley is an 1849 social novel. It was Brontë's second published novel after Jane Eyre. The novel is set in Yorkshire in the period 1811–12, during the industrial depression resulting from the Napoleonic Wars and the War of 1812. The novel is set against a backdrop of the Luddite uprisings in the Yorkshire textile industry.
Villette (1853) was Charlotte Brontë's fourth novel. It was preceded by the posthumously published The Professor, her first, and then Jane Eyre and Shirley. After an unspecified family disaster, the protagonist Lucy Snowe travels from England to the fictional French-speaking city of Villette to teach at a girls' school, where she is drawn into adventure and romance.
The Professor was the first novel by Charlotte Brontë. It was originally written before Jane Eyre and rejected by many publishing houses, but was eventually published posthumously in 1857. The book is the story of a young man, William Crimsworth, and is a first-person narrative from his perspective. It describes his maturation, his loves and his eventual career as a professor at an all-girls school.
Emma (unfinished)
Charlotte Brontë wrote only 20 pages of the manuscript, published posthumously in 1860. Another lady whom the name we don't know complete the later chapters.
It is a clue which link the mysterious girl, Martina and the guardians, Mrs.Chalfont and Mr.Ellin together.

Charlotte Brontë (1816 –1855) was an English novelist and poet, the eldest of the three Brontë sisters who survived into adulthood and whose novels are English literature standards. She wrote Jane Eyre under the pen name Currer Bell.