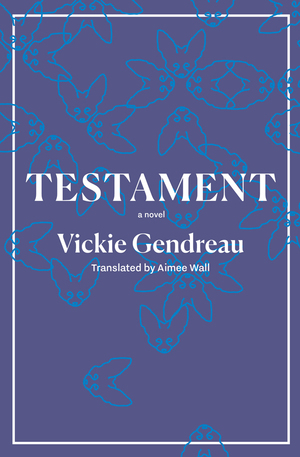 On June 6, 2012, Vickie Gendreau was diagnosed with a brain tumour. In between treatments, between hospital stays and her "room of her own," she wrote Testament, an autofictional novel in which she imagines her death and at the same time, bequeaths to her friends and family both the fragmented story of her last year and the stories of the loved ones who keep her memory alive, in language as raw and flamboyant as she was.

In the teasing and passionate voice of a twenty-three-year-old writer, inspired as much by literature as by YouTube and underground music, Gendreau's sense of image, her relentless self-deprecation, and the true emotion in every sentence add up to an uncompromising work that reflects the life of a young woman who lived without inhibitions, for whom literature meant everything right up until the end.

In this way, Testament (translated by talented writer and translator Aimee Wall), inverts the elegiac, "grief memoir" form and plays with the notion of a last testament, thereby beating any would-be eulogists to the punch.