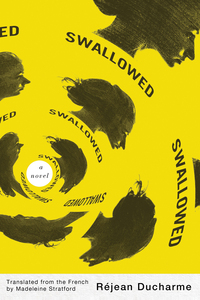 In 1966, Réjean Ducharme, then a 24-year-old unknown, published L'Avalée des avalés, this debut novel that would go on to serve as a zeitgeist for several generations of French-Canadian readers. Over the last fifty years, it has become a cornerstone for a culture, taught in high schools and universities as the foundation of the modern Québécois literature. Astoundingly, an English-language edition of the book hasn't been in print since 1968, and has never before been available in Canada.

At nine years old, Berenice feels trapped by home, family, and dogmas both real and invented. Precocious and over-intelligent, she despises her dysfunctional parents too viciously, loves her brother Christian too passionately, and follows the logical pirouettes of her imagination to conclusions too dangerous. She lives on a secluded island, where she hatches plans to run away with Christian and escape her mother's needy overtures for affection. When on the cusp of puberty Berenice becomes too wild for even her parents to control, she's sent to live in New York with her father's ultra-religious relatives where, pushed to confine her impulses, she instead forces herself forward to new extremes.

Gripping and hallucinatory, Swallowed is every bit as shocking and relevant today as it was upon first publication in 1966.