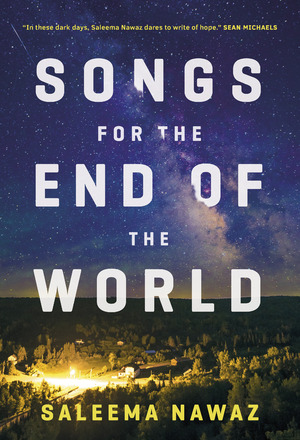 Songs for the End of the World


1) Novels can take years to research, write, and prepare for publication. Songs for the End of the World was written and revised between 2013 and 2019, and the author extensively researched the SARS, Ebola, and MERS-CoV outbreaks as well as historical pandemics such as the Spanish Flu of 1918–1920 in crafting the fictional ARAMIS pandemic in the novel. There is an eerie coincidence between the timelines in the novel and the real-world outbreak of COVID-19 in 2020. In what ways do incidents in the novel parallel the 2020 events surrounding the coronavirus? Which, if any, plot points or background information related to the pandemic in the novel struck you as implausible, or disturbingly plausible?

2) The novel is told through the perspectives of several characters, in different decades and physical locations. As the plot progresses, we gradually discover the interconnections between characters, as well as learn about what has happened to people we’ve met previously through oblique references in chapters narrated by other characters. For example, it is through Keelan that we come to learn how Edith has been dealing with her role in the crisis. What other examples are there of a character’s story arc being nudged forward through different perspectives? How does this structure influence your interpretation of the story? What moments surprised or delighted you?

3) The concern for children is a recurring theme. In the real world of the novel, we see Noah’s poignant vulnerability through the eyes of Sarah and Elliot; Emma goes through trials, sometimes of her own creation, that ultimately inoculate her unborn child. And in the fictional world of Owen’s novel, How to Avoid the Plague, we learn that children are the hardest hit victims of the virus. What do children represent in Songs for the End of the World?

4) Although Owen is a serial adulterer, it is because Rachel yearns for children and Owen refuses to have them that their relationship ultimately fractures. Are you sympathetic to Owen’s reasons for not wanting a child? What do you make of his response to Noah? Is Owen successful at redeeming himself in the end?

5) Noah, Rachel’s son Henry, as well as Dory and Julia’s baby were all conceived using sperm donation, and Elliot receives startling news about his own progeny. What is the novel saying about the choice to have children, and adults’ responsibility to their offspring? Discuss how the novel explores themes of inheritance and legacy of all kinds.

6) As a child and the youngest person on board the Buona Fortuna, Emma navigates the boat—and her family—through a terrible storm. As an adult, she weathers ARAMIS. She is a character able to endure and lead through calamity. What qualities of her character contribute to such resilience? In which scenes do you see evidence of these qualities?

7) Edith Fraser has multiple names and identities: Xiaolan, the child adopted from China; Ed, the college student; Naomi, the waitress; ARAMIS Girl, the trigger of social hysteria around the pandemic. In what ways do various people and forces—restaurant patrons, Owen, Keelan, NextExtinction.com forum commentators, society at large—project their desires and fears onto her? In what ways might the fact that she’s a young Asian American woman interplay with such projections?

8) Jericho shares his name with a famous walled city considered one of the world’s first sites of civilization. The language he teaches, Esperanto, was developed in the late nineteenth century and intended to be a language of hope that would help humans transcend cultural divides. What do you think prompted Jericho to take up Esperanto? In what ways is the Jericho of 2004 (when he lives in a dorm with Stu) different from or similar to the Jericho of 2020 (when he strikes up a friendship with Ed)? What do you imagine causes him to change?

9) Each character reacts to ARAMIS differently, and in stages. The fearful, isolationist responses of Keelan and Owen, who have researched and written extensively about pandemics, are ultimately overturned by their impulses to care for others. Elliot is on the front lines in an infected city and, given the opportunity to retreat, chooses a different path. Afraid for her son, Sarah decides they will escape New York but eventually turns back, toward home. How do other characters respond emotionally to the pandemic, and what do they do in reaction to their emotions?

10) What feelings did the book bring up for you around the spectre of global pandemics? What did you learn about how you want to, or would hope to, respond in the face of such a crisis?

11) The strain of the coronavirus depicted in the novel is particularly deadly. How does the novel build tension around the spread of the virus? How did you feel about the deaths in the book? Did any strike you as particularly tragic? Were you expecting certain characters to succumb to the virus?

12) In what ways does the novel situate the ARAMIS outbreak within other major challenges of our times (climate change, wealth disparity, over-population)? In the world of the novel, how do wealth and other privileges influence resilience to ARAMIS? Is this portrayal an accurate reflection of real life?

13) One thrill of reading the novel is in discovering the links between characters. How are each connected? (Refer to the character web to stimulate your thinking.) What does this interconnectivity suggest or reflect?

14) Owen and Keelan have both written books about pandemics and become media celebrities as a result. Emma writes “A Song for the End of the World,” which becomes a kind of anthem for people coping with the age of ARAMIS. What influence does the media and social media have on individuals and on society as a whole in the novel? How does this compare to the influence that art has?

15) What are the songs for the end of the world referred to in the book’s title?

16) At the close of the novel, what do you think comes next for Elliot, Sarah and Noah, and the quasi-family at the cabin? For Emma and her family? In the end, would you characterize the novel as hopeful? Why or why not?