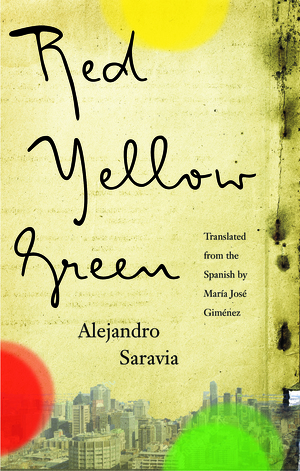 Traumatized by his past as a Bolivian soldier who, in a sudden coup d'etat, was forced to participate in atrocities, Alfredo flees to Montreal, haunted by the dead. He rides the Montreal metro and pours his guilt and shame into his writing, until he falls for a woman without a nation—a Kurdish freedom-fighter trying to blast an independent Kurdistan into existence. As the net of intrigue closes in on his lover, Alfredo is forced to face more fully his own violent past.

In a world where the intimate collides with the official and the past is made and remade again in a new country, Alejandro Saravia's novel in turn refuses to be bound by a single genre, style, or even language. Reminiscent of Michael Ondaatje's In the Skin of a Lion in its exploration of the complicated relationship between nation, memory, and identity, Red, Yellow, Green considers what a place can mean to people who are out of place. At once heartbreaking and uplifting, bleak and humorous, Saravia offers a poignant reminder of the power of generosity and love.