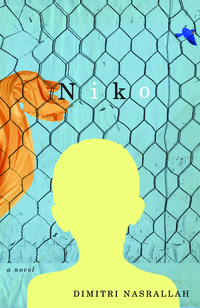 Six-year-old Niko Karaam has never known a life outside civil war. He rarely leaves his parents' small apartment, and from its small balcony he listens to the world outside tumble down one building at a time. But after a car bomb kills his pregnant mother, Niko is thrust into a much wider and confusing world without apartments or balconies, as he and his father Antoine embark upon the open seas on an impossible international adventure in search of a new place to call home. Throughout a twelve-year odyssey that leads them across seven countries, young Niko will have to choose between his swollen faith in an increasingly God-like and unreliable Antoine, and the pragmatic, hard-nosed alternatives that will ultimately lead to a better future.

Swiftly paced, poignantly moving, and beautifully imagined, Niko is the powerful epic story of what it takes to survive after war, of what to hold dear and what to leave behind in a world that won't let you have it all.