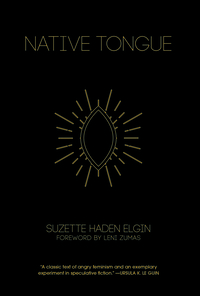 In 2205, the 19th Amendment has long been repealed and women are only valued for their utility. The Earth's economy depends on an insular group of linguists who "breed" women to be perfect interstellar translators until they are sent to the Barren House to await death. But instead, these women are slowly creating a language of their own to make resistance possible. Ignorant to this brewing revolution, Nazareth, a brilliant linguist, and Michaela, a servant, both seek emancipation in their ownways. But their personal rebellions risk exposing the secret language, and threaten the possibility of freedom for all.