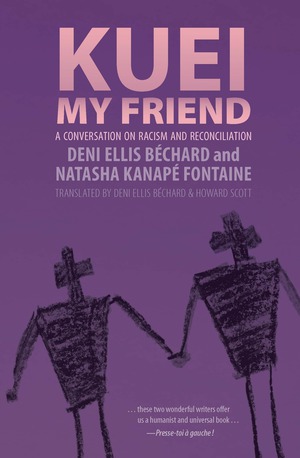 Kuei, My Friend is an engaging book of letters: a literary and political encounter between Innu poet Natasha Kanapé Fontaine and Québécois-American novelist Deni Ellis Béchard. Choosing the epistolary form, they decided to engage together in a frank conversation about racism and reconciliation.

Intentionally positioned within the contexts of the Idle No More movement, Canada’s Truth and Reconciliation Commission, and the National Inquiry into Missing or Murdered Aboriginal Women and Girls, the letters in Kuei, My Friend pose questions in a reciprocal manner: how can we coexist if our common history involves collective and personal episodes of shame, injury, and anger? how can we counteract misunderstandings of the Other, which so often lead to contempt and rejection? how can we educate non-Indigenous communities about the impact of cultural genocide on the First Peoples and the invisible privileges resulting from historical modes of domination?

In an attempt to open a sincere and productive dialogue, Kanapé Fontaine and Ellis Béchard use their personal stories to understand words and behaviours that are racist or that result from racism. With the affection and intimacy of a friend writing to a friend, Natasha recounts to her addressee her discovery of the residential schools, her obsession with the Oka Crisis of 1990, and her life on the Pessamit reserve. Reciprocating, Deni talks about his father’s racism, the segregation of African-Americans and civil rights, and his identity as a Québécois living in the English-speaking world.
By sharing honestly even their most painful memories, these two writers offer an accessible, humanist book on the social bridge-building and respect for difference. Kuei, My Friend is accompanied by a chronology of events, a glossary of relevant terms in the Innu language, and, most importantly, a detailed teacher’s guide that includes topics of discussion, questions, and suggested reflections for examination in a classroom setting.